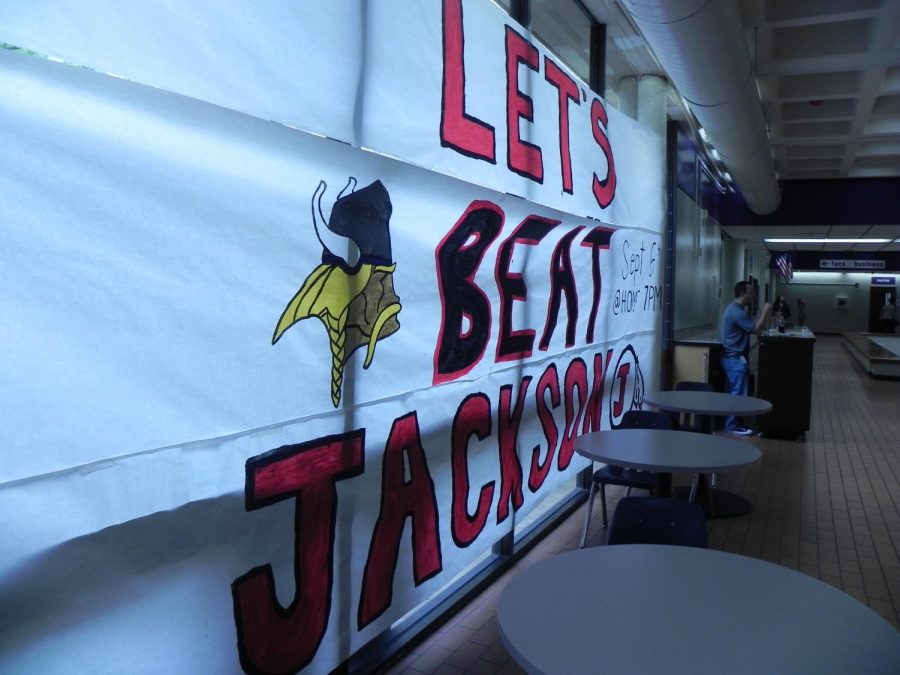 Parkway cheerleaders paint big posters to hype up the students during the week before the game. Sept. 6, North Vikings will be playing Jackson High School.

Friday, Sept. 6 will be the first home football game for the Parkway North Vikings of the season, and new changes are being implemented in order to assure the safety of students and fans after the events that occurred at the jamboree. Administrators from all Parkway high schools meet last Friday to figure out what these new measures would entail.

“We tried to figure out what were some common practices we had in place that we needed to tighten up,” said principal Dr. Tori Cain, who attended the meeting.

All Parkway schools will follow new guidelines to ensure the safety of both students and visitors who attend any game.

“All of us need to have the same standard because we are a larger community,” said Dr.Cain.

Fans who attend the game tonight and in the future will notice an increased presence of security personnel.

Fans will also no longer be able to carry bags into the stadium or bring in outside food or drink. The only exceptions are for purses, diaper bags, and bags containing medical necessities such as insulin. However, these bags will still be checked upon entry.

“I think just the initial transition of students and fans getting used to the change [will take] a little adapting, but once that happens I think it will go pretty well,” said athletic director Corey Johnson.

Fans are asked to stay in the stands or on the grassy areas around the field. Anyone who leaves the stadium will not be allowed re-entry. After the start of the game, no loitering will be allowed outside of the stadium, and the gates will close at the beginning of the third quarter.

In an email sent out to students and parents, administrators let parents and staff know the expectations. Anyone who does not follow the expectations or is disruptive will be asked to leave the game. These changes will be put into place at this Friday’s home football game against Jackson and will continue throughout the year to help all fans enjoy the season.

“I feel like [the changes] are deserved, and they should have been like that from the beginning,” said freshman Amier Salameh.