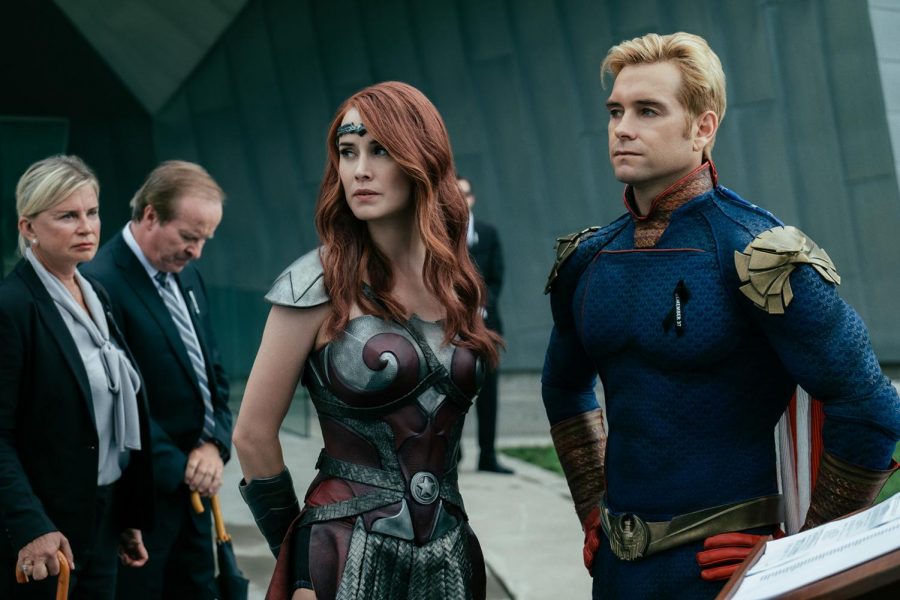 The Boys got its first on-screen adaptation in the form of an Amazon Prime Video original on July 27, 2019. The Boys is a Dynamite Comics series about a politically corrupt Justice League, called The 7, that gets away with heinous crimes because of how they are perceived by the public: as heroes. The Boys is a breath of fresh air since it is not the cliche superhero story that the audience usually gets. Instead, the show comments on social issues and provides a depth of characters not seen in a typical superhero show.
The 7 consists of The Homelander (Anthony Starr), Queen Maeve (Dominique McElligott), A-Train (Jessie Usher), The Deep (Chace Crawford), Black Noir (Nathan Mitchell), Starlight (Erin Moriarty), and Translucent (Alex Hassell). The 7 may be perceived as heroes by the public but when the cameras are off, their true personalities are shown. Homelander is an abusive fascistic Superman; The Deep is a misogynistic, sexually abusive Aquaman; A-Train is a drug peddling, girlfriend-murdering Flash; Translucent is a perverted version of The Invisible Man. The only morally good heroes of The 7 are Queen Maeve, a Wonder Woman clone, and Starlight.
The Boys of the show’s namesake are the REAL heroes of the show, The Boys consist of Billy Butcher (Karl Urban), Frenchie (Tomer Kapon), Mother’s Milk (Laz Alonso), and Hughie Campbell (Jack Quaid). Each with their own burning desire to ruin everything that the “supes” stand for.
The show does an amazing job at making the villains totally detestable without any redeeming qualities. They’re rude, pretentious, and just jerks. The way these characters make the audience feel towards them is similar to Catcher in the Rye’s view of fake people, because that’s what The 7 are – a bunch of fakes. To counteract the awfulness of the heroes, The Boys themselves are very identifiable. Butcher and Hughie’s motivations for destroying the “superhero culture” is perhaps one of the darkest backstories that has been put to screen. However, the audience becomes sympathetic towards the characters due to the story being understandable.
However, there are plenty of characters whose motivations are unclear or are otherwise ignored in favor of giving other characters the spotlight. Take Frenchie and Mother’s Milk for instance seem to just be tagging along for the ride, with no personality or defining traits other than being part of The Boys. They offer little in terms of plot development or character which is in sharp contrast to the book where they have very solid and relatable reasons for hating superheroes.
For fans, the show follows the comic’s story with relative accuracy. When Hughie’s girlfriend Robin (Jess Salgueiro) gets murdered by A-Train after running through her on a drug-induced sprint, Billy Butcher confronts him and enlists Hughie to the anti-superhero organization known as The Boys. The Boys seek out to ruin the lives of supes and to stop Vought American’s plans to get Homelander in the white house.
The Boys on Amazon Prime Video is an excellent show that is much more than meets the eye. It’s commentary on fake people is sure to hit home with its young adult audience, all episodes are currently streaming on Amazon Prime Video and it’s a PRIME suspect for binge watching over winter break.