Hard Work Pays Off for Vikettes at State 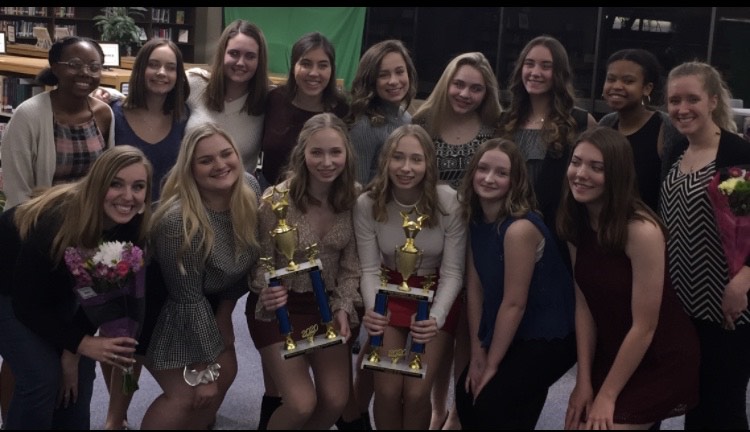 The Vikettes celebrate their successful season with an end of the year banquet on March 6. The team received trophies for both their mixed routine and their hip-hop routine at State in February.

On Feb. 29, the Parkway North Vikettes competed at State at the Hy-Vee Arena in Kansas City. The team placed fourth for their mixed routine and fifth for their hip-hop routine, an improvement on last year’s placement at State.

Before getting to the state competition, the Vikettes trained intensively throughout the school year. They began training in the summer, learning routines and getting to know each other.

“We start out the season by preparing and going to UDA [Universal Dance Association] camp, where we perform and earn awards as a team and individually. It’s really fun,” said junior Macy Nimock.

UDA offers camps throughout the summer to prepare teams for the upcoming season and give them pointers on dances. North’s Vikettes attended UDA camp at St. Louis College of Pharmacy last July and learned skills that helped the team perform at sporting events.

“We begin to prepare for football games in the early school year. Those routines are usually the shortest. Most [of them were] taken from camp dances we learned earlier since we have to do a lot of them,” said Nimock.

This year football routines have been slightly different since the Vikettes got to perform a tad bit more.

“We started doing sidelines with the cheerleaders this past year, which has been really fun and one of my favorite things so far,” said Nimock.

Usually the Vikettes would wait to perform their dances during halftime, while the cheerleaders would cheer throughout the game and at halftime as well. However, since the Vikettes were able to increase their presence at the football and basketball, they were able to increase their skills as the  games allow the team to stay in shape and practice for their competition season later in the school year.

“Our first competition is usually in December, and then we have one in January and February. The last one is always State, and every other year it’s held in Kansas City.”  said sophomore Molly Reeves. “It was exciting to travel with the team this year. This was my second season, so it was my first time at the Kansas City competition.”

At competitions, the Vikettes performed a hip-hop routine called “Hip-Hop Anonymous” and a mixed routine to Diana Ross’s popular “I’m Coming Out.” The December and January competitions provided critiques to perfect dances for State.

By the time of the state competition, the Vikettes had been practicing for almost seven months. While not all this time was spent on competition routines, the long season proved to be a taxing challenge to Nimock at moments.

“I know at least I get a little burnt out by February, but it’s the driving love for the sport and my friends that carry me through,” said Nimock. “February feels like the hardest month. But after you compete, you immediately wish you could do it all over again. Our season is long but super rewarding.”

While the team’s hard work ultimately paid off at State, Reeves still wants to work to make the routines even better for her junior and senior seasons.

“Specifically, I want to get some hip-hop tricks down like a Kip up. Separately, I’d like to get all my turns in second,” said Reeves.

Preparation for next season is due to begin with tryouts April 14-16 in the upper gym but may be postponed. More information can be found on the Vikette’s Facebook and Instagram pages.