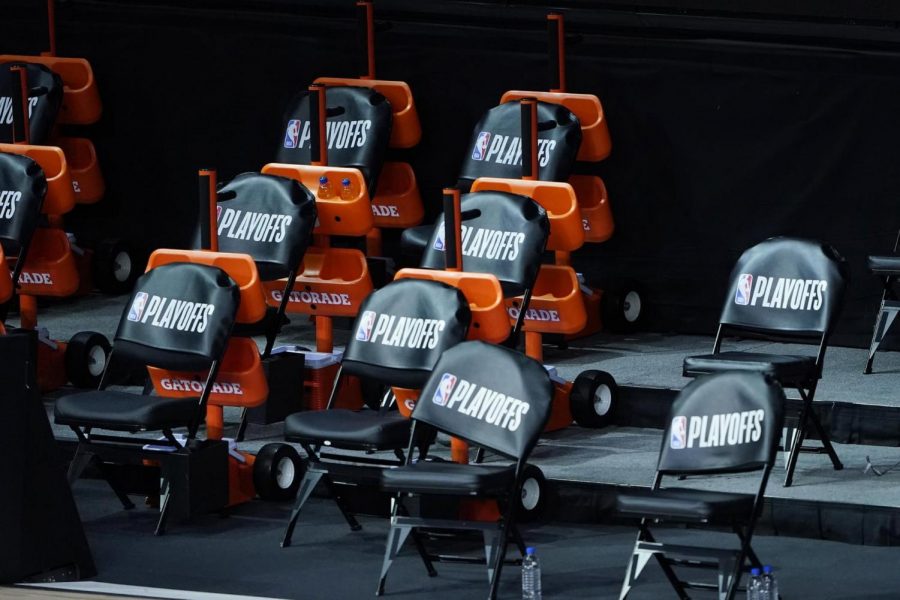 The Milwaukee Bucks bench remains empty after the scheduled start of game five against the Orlando Magic in the first round of the 2020 NBA Playoffs on August 26, 2020 at AdventHealth Arena at ESPN Wide World Of Sports Complex in Lake Buena Vista, Florida. The Bucks boycotted their game 5 playoff game against the Orlando Magic to protest the shooting of Jacob Blake by Kenosha, Wisconsin police. (Ashley Landis/Pool/Getty Images/TNS)

NBA franchises and players headlined the news earlier in August by staging a walkoff to protest the police shooting of Jacob Blake in Kenosha, Wisconsin. Multiple NBA players and staff members decided to postpone several playoff matchups to protest police brutality and show their support for the Black Lives Movement.

“I’m proud of them [NBA] for taking steps like this to help their own communities. After all, most of the basketball players are African-American,” said freshman D’Ralph Dixon-Powell.

According to ESPN, 81.9 percent of players in the NBA are black. Millions of fans watched as players from all backgrounds stood in solidarity to protest the injustice sparking players from other sports and people in general to take notice.

“NBA players have such a large platform, so I applaud the players using their voice positively for change,” said North Athletic Director Corey Johnson.

The NBA teams scheduled to play their playoff games on Aug. 26 never arrived at the courts. Hours later, two Milwaukee Bucks players George Hill and Sterling Brown read an announcement to a group of reporters at Disney’s AdventHealth Arena.

“We are calling for justice for Jacob Blake and demand the officers be held accountable. For this to occur, it is imperative for the Wisconsin state legislature to reconvene after months of inaction and take up meaningful measures to address issues of police accountability, brutality and criminal justice reform,” stated Hill and Brown.

The NBA teams were not the first to protest against unjust police killings. WNBA players in 2016 wore warm-up shirts that read “Change Starts With Us: Justice and Accountability”. The shirts worn were to remember Philando Castille, a Minnesota native, and Alton Sterling from Louisiana.

“Racism is alive and well. You can look anywhere and find it. I’ve experienced it multiple times in my life, whether it’s on social media or real life,” Dixon-Powell said.

NBA commissioner, Adam Silver, wrote a letter to the players and staff stating that they should do more to help combat police brutality and racism in the United States.

“I understand that some of you feel the league should be doing more. I hear you — and please know that I am focused on ensuring that we as a league are affecting real change both within our organization and in communities across the country. Through the efforts of our internal Social Justice Task Force and the commitments we made, including the formation of the first-ever NBA Foundation to create greater economic empowerment in the Black community, we are dedicated to driving the sustainable change that is long overdue,” stated Silver

This is not the first time a sports league has used their platform to voice concerns over injustices. On Oct.17, 1961, Russell and five African-American players from the Celtics and the St. Louis Hawks opted not play the game that was scheduled. They were faced with racial injustices that prevented them from fairly getting basic necessities, such as food and shelter.

The NBA boycott inspired many other sports to postpone numerous matchups, bringing undeniable attention to the topic of racial injustice and systemic racism.

“The walkout as a whole was great to help people finally open their eyes about the blatant racism that goes on in the United States,” said Dixon-Powell

Even though the NBA playoffs have restarted and the winner of the championship will be celebrated, the public will better remember the 2020 NBA walkout for years to come.