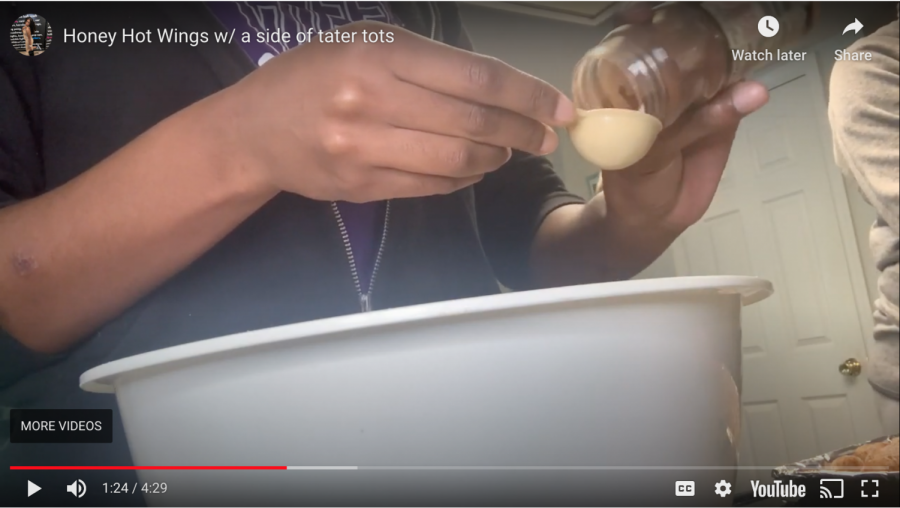 Symone Woods, cadet teacher for International Cuisine, makes honey hot wings with a side of tater tots. The class usually cooks every Friday, and each student can pick what they want to make as long as it relates to the topic that they learned about that week. This week, the class learned about regional foods.

Since the beginning of August, teachers have been working non-stop to try to make their classes fit into the online learning environment. With the inability to have hands-on activities, the constant challenge is to try to keep students engaged. Among teachers, it’s agreed that long lectures need to be broken up, activities have to be set up to keep students interested and different technology programs should be utilized to convey information in an effective way. Teachers are taking different approaches to execute these goals.

“At the end of the first week, I told [a story], and then the next thing I know half the class was unmuted, chiming in and laughing. At that point I was like ‘ok I can make this work,’” said math department chair Jennifer Mueller.

Kara Sussman, who teaches International Cuisine, breaks up her lectures in a different way. “I’ve had Ms. Diel, our librarian, come into class and demonstrate [a technology skill] because I think it’s nice to have someone else break it [the lecture] up…”

Teachers who teach more hands-on classes have had to get creative in how they engage their students online.

“Family and Consumer Sciences is very hands-on, so we had to [figure out] how to change our course to the computer screen, and also prioritize the most important material,” Sussman said.

In addition to prioritizing material and adapting lessons to the online environment, teachers have had to adapt to shorter classes and the quarter system as well.

“My teachers are just making sure they answer [all of our] questions and try to give us as many resources so we can understand the material,” said senior Abby Bockerstett. Bockerstett is taking French 5, Precalculus, Masterpieces, and Cadet Teaching for Personal Finance.

Bockerstett has had troubles getting into her French class multiple times. She says that when this happens, she emails her teacher and watches the recording of the class later that day.

Technology is obviously a big part of the online environment. Both teachers and students have had to learn new ways to teach and learn the material. In addition to the teaching aspect of the classroom, administering tests has also changed due to virtual learning.

Mueller and Sussman have adopted similar techniques of giving their tests. Both have their students log into the Zoom before they release the test, and both allow their students to log off when they have completed the test. During the test is where the two differentiate.

To prevent cheating, Mueller has multiple versions of her tests and asks her students to keep their cameras on during the free response test in class. In contrast, Sussman gives her students the option to turn their video off.

“We all stay in the Zoom together, we take the test, and then when the students are done with their test, they privately message me to make sure I have received it,” said Sussman.

Sussman uses Google Forms to administer her tests. Other teachers, like Mueller, are using Schoology or Kami, a chrome extension that allows students to write on the test to show their work digitally.

Overall, teachers have done a great job adapting to teaching in this different setting. The challenges of talking to a screen instead of faces in a classroom is compounded with the technological side of learning and the balancing of independent work as well.

“I know a lot of kids, including myself, get tired of looking at the screen for four hours straight… more independent work will be nice,” said Bockerstett about changes she thinks the school could make.

“It’s still a student’s responsibility to keep up with school,” said Mueller.