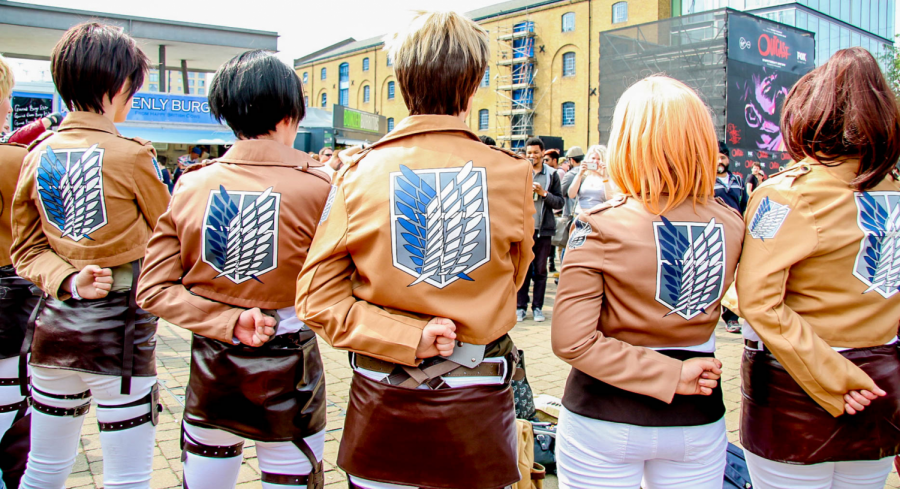 Attack on Titan was massively popular, inspiring events and cosplays like the one pictured above, at MSM Comic Con.

On Dec. 7, 2020, “Attack on Titan” launched its final season after seven years of delighting its fans. The Japanese anime based on the manga by Hajime Isayama was an instant success, drawing in viewers with its compelling storytelling and great characters. So far, this final season, which ends in April, has not disappointed with engaging characters, fast-paced actions, and a plot that answers many questions brought up in seasons 1-3.

The first three seasons show the life of humanity inside massive walls that protect them from Titans – large, powerful humanoid figures – that seek to wipe them out. The main character, Eren Jaeger, was a young boy when his hometown inside the walls was destroyed by an attack from the Titans and his parents were killed after a century of peace. Eren vows to wipe out all of the Titans and comes to find out that he has the ability to transform into a Titan, which leads to more questions about the Titans.

At the end of the third season, Eren and his companions learn that his people, called Eldians, were exiled by the rest of humanity to their home, a small island in a much larger world. The true enemies of the residents of the wall were not the Titans, but the people who confined them to the island.

This ending lead to the plot twist in the final season which starts and moves fast. Instead of showing what is happening on the island, within the wall, it shows the life of the people of Marley, the nation that exiled the Eldians to the island. While this feels like a different story with different characters, it serves as a way to answer many questions form the past.

Viewers meet Falco, Gabi, Udo and Zofia, Eldian children being trained to fight the islanders that they are brainwashed into believing are evil and seeking to destroy them. For the first time in the show, the lines between good and evil are blurred, and continue to be after the islander mount an attack against Marley, killing civilians. The essential part of the first season, the battle of humanity against the invading monsters, is flipped. The victims of violence are now turned into the aggressors, and it is now up to the viewer to try to pick a side.

The creators do an excellence job developing Falco, Gabi, Udo and Zofia so that the viewers can see the parallels between Gabi and Falco, and Erin and his friends when they were children. They all were drawn into violence from a young age, and are forced to make decisions that children of their age shouldn’t have to.

The same can be said of Eren and Reiner and Bertholdt, who were forced to attack the island as children. They see first hand the destruction that is caused by going to war, and are forced to weigh their morals against victory.

Despite how much has changed between the third and fourth seasons, the action that brought viewers into the show remains the same. It is violent, flashy and the music – written by Hiroyuki Sawano – continues to be amazing.

This season was developed by a different studio than the previous three, which led to viewers worrying that the show would change for the worse. In some ways that can be argued. The animations are different than before, but after an episode or two I got used to it, and it in no way lacks the explosiveness that I loved.

The same can be said about the characters. Over the course of the first three seasons, I came to love Eren, Mikasa and Armin, the three protagonists. In this season, we see them changed by everything that they had gone through, and see more nuance behind their actions.

Everything that the show does right in the first seasons is carried over into season 4. The action, the characters and the storytelling that brings viewers to ask for more are all there. While it is only 8 episodes in, I am extremely excited to see where the story will bring viewers next. It is shaping out to be a great season, and I highly recommend it.