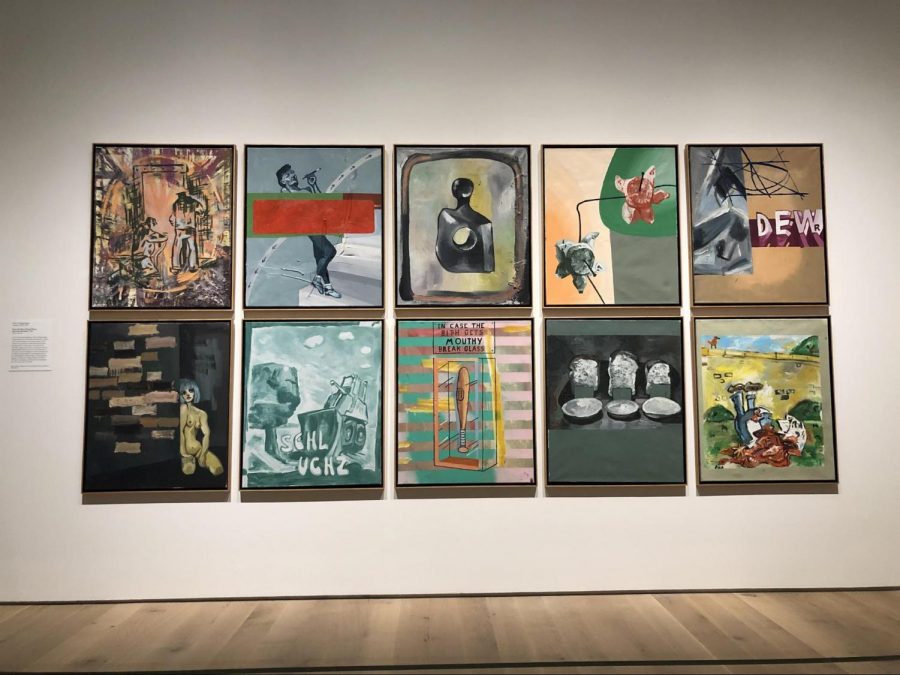 Works by George Baselitz, A.R. Penck, and Franz West can be viewed as part of the latest exhibit, “Storm of Progress: German Art After 1800” at the Saint Louis Art Museum running now until Feb. 28. A major portion of the exhibit and the name of it as well, was inspired by German Jewish cultural theorist Walter Benjamin, who imagined history as a powerful storm that would launch humanity into an uncertain future. Facts like these and more were displayed on the white walls all around the exhibit.

The St. Louis Art Museum is known for its astounding and creative art exhibits and collections. Throughout the years, they’ve had many iconic shows featuring the voices and stories of a variety of artists and cultures. “Storm of Progress: German Art After 1800” is in its final week as the the main exhibition at the museum with its last day on Sunday Feb. 28.

The exhibit features German art from the last 200 years and includes pieces from countless German artists who were silenced by Nazis during the times of the Holocaust and World War II, which made this exhibit even more meaningful. There were also many pieces inspired from the times of World War I, the Cold War, and the fall of the Berlin Wall. With all of the history, creativity, and significance of the pieces, this exhibit is a must see before it leaves.

Located in the Main Exhibitions Gallery in the East building of the museum, the exhibit was open from 10 a.m. to 5 p.m. on Tuesdays through Sundays, 10 a.m. to 9 p.m. on Fridays and is closed on Mondays. It is important to note that the final admissions to the museum is an hour before closing times but admission is free.

Like most exhibits, there was a show room with paintings, objects and structures of art and then descriptions of the pieces with the names of the artists and the time period that the art was from accompanying the artwork. It was pleasant to see, not only the different stories, objects, paintings and projects shown, but also different art styles. They included forms of realism, abstract art and expressionism.

The setting of the exhibit was tranquil and serene, with white walls, lights that weren’t too bright and hushed quietness. A stunning detail was the usage of shades of black all around the exhibit. The contrast was aesthetically pleasing, made the art easy to view in the lighting and it made it more inviting to read about the art.

The creation and organization of this exhibit was also quite noteworthy. It was enjoyable to see a variety of art as one progressed throughout the exhibit. And, even more interesting was how interconnected the art, history and overall emotion was in this exhibit.

The organizers of the show did an amazing job in emphasizing the connection between art and history. With every piece, there were facts on its importance during certain eras of history with artistic interpretations as well. As mentioned before, as an exhibit of German art, they showed powerful pieces of art from or about the trying times in Eastern Europe in the 20th century and each stroke of paint, each symbol in the pieces, represented a rebellion through art.

Because of the times in which the art came from, there was also propaganda displayed at this exhibit, which was unexpected. It was surprising to see this but also very thought-provoking. The propaganda challenges the viewer to step into the shoes of Germans during these times. It altered my view on the art itself, for it showed that there is more to art than just an emotional impact. Art can be used to change a person’s thinking. .

Since this exhibit is tied to a heavy part of history, there is a warning on the first wall as you enter, stating that there are a few images that may be hard for some viewers to see. There in fact, was a huge display of pain, sorrow and suffering in the exhibit. It started off light with colorful pieces but towards the middle began to showcase more of the suffering that so many endured during the Holocaust.

The exhibit also has an audio guide via the Art Museum’s website. The audio tour gives numerous facts about the importance of this exhibit and the pieces included in it that a viewer may not recognize without it. There is also an 11- minute video on the exhibit’s website, named “Storm of Progress: German Art After the 1800s, that gives a peek into the production of the exhibit. Although the video isn’t the same as walking through the showroom and witnessing every piece’s emotion with your own eyes.

The St. Louis Art Museum, just like many other businesses, have also honored the COVID-19 guidelines with this and other exhibits. No more than 15 people were allowed in the exhibit hall at a given time, and, if the room was already full, you would have to wait at the beginning of the exhibit before entering. It wasn’t so bad though. The longest I had to wait was 5 minutes. A small price to see great works.

Overall, this exhibit was memorable, important, and very exciting and meaningful to view. It was amazing to see how powerful and real the connection between art and history is. “Storm Of Progress: German Art After 1800” is an exemplary exhibit that every fan of either art or history should see before it leaves this weekend, so be sure to visit the Art Museum before it’s gone.