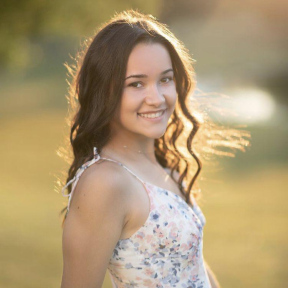 Madeleine Ryan has taken honors classes her entire high school career while tacking on a medley of impressive extracurriculars. Most notably in her senior year, Ryan assumed the captainship of the State Champion track and cross country team and was the NHS secretary.
“I’ve run cross country and track all of high school, done NHS the last two years, and was a part of the Safe and Drug Free Program sophomore and junior year. I think it has forced me to manage my time better,” said Ryan.
Ryan has done all of this while maintaining a high GPA and excelling in areas like science and English.
“I think the English project I am most proud of and definitely had the most fun with was my Common App essay in AP Lang. It was a nice change to be able to write about something personal rather than just academic essays,” said Ryan.
A major contributor to Ryan pushing herself in high school are her big dreams and aspirations in the future. Ryan is interested in being a physical therapist or going into something related to the medical field one day.
“College has been super important to me, so I know that in order to get into a good one I have to maintain my grades,” said Ryan. “I definitely think my involvement in running the past few years has made me interested in physical therapy and how the human body works in general. I’ve been in and out of physical therapy many times and it seemed like a good fit as a career for me,” said Ryan.