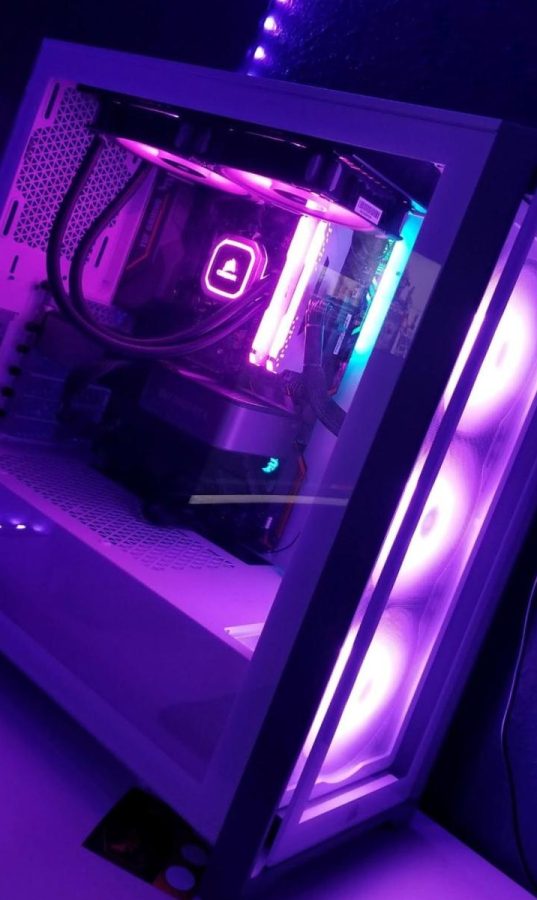 Growth in popularity in PC building has brought many people into the hobby. The many options for parts and components give builders high amounts of customization.

There are 2.8 billion active gamers worldwide, and Techjury predicts that the number will surpass 3 billion by 2023. For decades, gamers have focused on playing on Xbox or PlayStation, but recently, PCs have made a rise in popularity. PC gamers make up 1.8 billion of the total players, but the so called “console wars” between Xbox and PlayStation have overshadowed this third choice.
“PC is definitely better in my opinion,” junior Leo Skiles said. “It has smoother gameplay, and you can troubleshoot problems easier.”
One reason that people are driven to PCs is the customizability of PC gaming and range of options available. While console options range between $300 and $500, PCs range from $300 to over $5,000 and are more customizable. People are able to build their own computers and add what they want. While it may seem extremely complex, it comes down to mainly budgeting the parts required and assembly.
“There are a ton of resources,” Skiles said. “There are YouTube videos and other guides that make it really simple.”
Any computer, from a normal laptop to a full gaming setup requires most of the same components: A central processing unit (CPU) acts as the “brain” of the system and performs primary functions; random access memory (RAM) stores information for short periods of time; hard drives store long term information such as pictures or other files; the power supply unit provides power to the computer; and the motherboard is the “foundation” that everything is built on.
The difference between a simple workstation computer and a more complex one designed for gaming is that the gaming rig generally has parts that are designed to increase performance and speed.
This is where users have options. Buyers can either build their own or buy prebuilt systems. One large benefit of building is cost.
“It is cheaper to build a high end gaming system,” engineering teacher Allen Daniel said. “It costs less to build than to buy directly from a store like Best Buy or Micro Center.”
Because of how interchangeable most parts are, buyers can choose between different price points for a variety of different components, allowing users to choose to have higher performance in some areas, but save money in places that they think are less important.
“You can upgrade very reasonably,” Daniel said. “If you don’t like how it is performing in certain areas, you can simply replace the part with a better option.”
Performance isn’t the only factor that plays into components that buyers choose. The appearance of the PC can change depending on which case or other parts are chosen. Brands such as Corsair specialize in RGB lighting, which gives users options on what color fans or other parts light up.
“Some parts, like water coolers, are usually very bright colored,” Daniel said.
Over recent years, social media platforms such as TikTok have made PC building, which used to be a niche experience, mainstream. Users such as CarterPCs, who has gained over 2.6 billion followers, have made the hobby more accessible for more people. In 2020, roughly 1.75 million people played games on PC, an increase from 1.5 billion the year before.
Although PCs may not be for everyone, they certainly provide unique flexibility in terms of both performance and price that a broad range of users can take advantage of. If upward trends continue, building PCs will see an increase in players and users for years to come.